Hi Everyone! I have problem with World of tanks don’t work . I have been Trying change options in lutris.
In Configuration Wine Version i use to lutris-5.7.11 but game don’t work and i did changed to lutris-5-21 and too don’t work . I have linux mint 20 cinnamon GPU: radeon RX 570 4G
My lutris --submit-issue : https://paste.ubuntu.com/p/ccycHDTc6J/
I did start up a computer stock settings and kernel and the same problem .
World Of Tanks logs:

Option “-e” is deprecated and might be removed in a later version of gnome-terminal.

Use “-- ” to terminate the options and put the command line to execute after it.

I’ve recently experienced a problem with WGC and World of Warships not working anymore with lutris runners.
You can check this trhead on the WoWS forum : https://forum.worldofwarships.eu/topic/143893-recent-linux-crash-at-startup-memvirtmem-issue-and-fix/?tab=comments#comment-3706049
Perhaps you’ll find something usefull.

Thanks ,I don’t played else on linux WoWS but launcher its the same but i can try start up with proton . When I have been problem with update game and WGC it change to wine dev and working but for this moment any settings don’t work

Check this out for WoT

I can play WoT using Lutris 5.8 with a terminal, wine: lutris-5.7-11, dxvk: 1.7.2L-5ca255d and with the settings above, I have not tried without them. I think it is because of a new update to the wargaming launcher

Thanks i will try Lutris 5.8 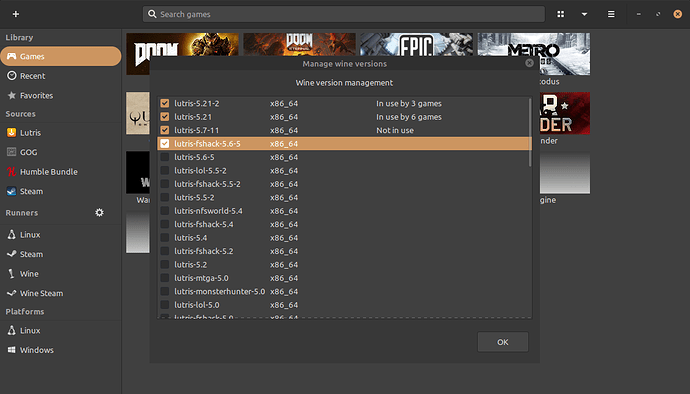 I was talking about the Lutris program version, not wine version : )
But I can see that you are using Lutris 5.8, so you should be good to go, but you never know with wargaming.

yes I have version 5.8, you’re right but maybe this is fault distribution ? on Manjaro working but are problems with games on origin platform , under inux Mint games from EA working . This is interesting