I’ve had a reoccurring issue with linux and vkd3d/wine. The issue is that whenever I install a new system that chance of vkd3d working is 50/50.
Currently I have a wine prefix installed on an external drive. When I connect the drive to one PC vkd3d works in the prefix, when I connect the other PC, vkd3d does not work in the prefix.
Also the .wine folder in the home directory seems to have no effect. I’ve deleted the .wine folder on both systems and nothing is effected.

dxvk/vkd3d work on one system

while the other system only works with dxvk

both using the exact same prefix and settings

In the past I used to think something was wrong with the prefix, but the issue stems from pc to pc while the prefix is working just fine. It just depends on the PC.

This why when people share instructions to install vkd3d-proton or anything else that is no good to me because the wine prefix is just fine.

Is they’re something I’m missing as how vkd3d is installed onto a system?

Also when you steam I can restore backups of all the protons and horizon zero dawn. After doing so on one PC game launches just fine, on other pc game crashes.

It’s all related to vkd3d not working, but I don’t understand why?

the 3070 is currently not working with vkd3d

Sad reality as well is that no lutris install scripts seem to install vkd3d. Lutris almost seems abandoned in favor of steam-proton.

If anyone has deep knowledge on how to consistently ensure vkd3d works on a Linux system I’d be glad to here the details.

DXVK has nothing whatsoever to do with vkd3d-proton, except it needs to be a build with support for dxvk_config.dll, which should be all DXVK versions after 1.8 I think.

For Steam you need to be using at least Proton 6.3-4 (or Proton Experimental), or Glorious Eggroll or TKG 6.5 or later. Especially for Cyberpunk 2077.

Sad reality as well is that no lutris install scripts seem to install vkd3d. Lutris almost seems abandoned in favor of steam-proton.

Um, that’s not a thing. Lutris doesn’t “install” vkd3d-proton into wine-prefixes. That’s not how it works, at all. Lutris comes bundled with both DXVK and vkd3d-proton. It loads them at runtime assuming you have “Enable DXVK/Vkd3d-Proton” toggled on in the “Runner Options” menu for each non-Steam game.

Also don’t use Lutris to launch Steam games, just launch them from Steam.

And Lutris isn’t remotely abandoned, it’s in active development. You seem to have some misconceptions about how Wine, DXVK, Vkd3d-Proton et al. interact with one another, that’s not anything to do with Lutris (or Steam).

And without you providing even a single log file, no one’s going to be able to help you. It’s even more sad when Lutris includes the ability to save logs to a file with like 3 clicks. 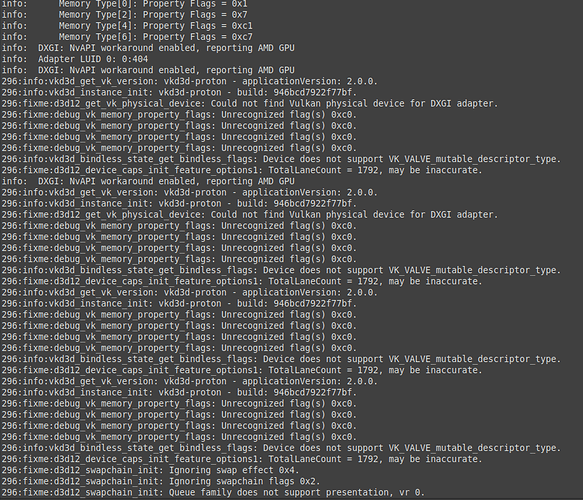 I’m getting this in my logs