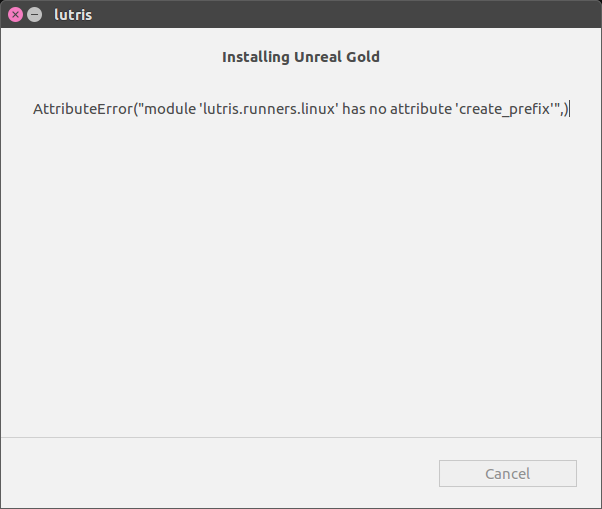 It seems like the engine repository got moved, but I don’t know to where. I’m not sure what to make of the other errors. Any help appreciated.

Yeah, I went on an issue closing rampage (mainly due to a lack of contributors) and that made a script contributor rage quit anything related to Lutris.
I fixed the create_prefix error but to fix the whole script, I would need the GOG version of the game (I only have it on Steam).

The author for the GOG version had a different stance than I had regarding distribution of Unreal Gold files. The OldUnreal team only distributes a Windows installer, which contains Linux files which makes very little sense. The “legal reasons” for not distributing directly usable Linux files don’t make sense either and the project seems pretty much abandoned now anyway.

For the Steam installer, I took the decision to host the Linux files on Lutris.net. This is what the GOG installer should use as well. With the use of InnoExtract, there should be no need for Wine at all in the GOG installer.

If I can get my hands on a copy of Unreal then I can update the installer. I maybe you can try it yourself by adapting the Steam installer and taking bits from the Quake 2 + GOG installers which uses InnoExtract.

Well, I’ve got a working installer now, but there are a couple of things I’d still like to fix:

There’s a post on the oldunreal forum about tearing at the top of the screen, which is what I see, but no solution is given there.