When I start the Escape from Tarkov launcher, I get a small login window where I have to login, when I click in the window it gets black 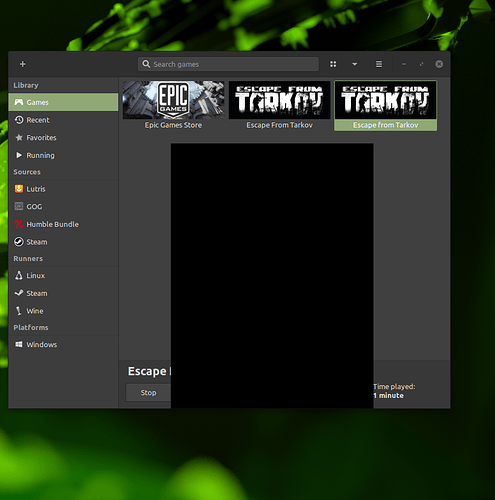 I tried to switch in the configuration the runner from lutris to wine, but then I get an error which says wine has no esync.
I have the newest verison of everything

first off Escape from Tarkov is battleye anti-cheat right i dont think that work on linux i can be worng.
also did you try this.

You’re kinda wrong. It is now possible to get battleeye support with proton. It should be technically possible to make it work with proton. Thought from what I heard so far the furthest people have gotten is just launching it and getting into the menu.

Also for a note, valve/steam is also working on bringing EAC support as well for linux and there is quite a few battleeye games working on steam already. So the future is not all that dark for Tarkov working, might need some work done on making it more friendly to battleye on linux from the devs thou. I am a bit fuzzy on the details.

edit: might be that the lutris works and no one just ever reported on it. Gonna give it a try myself.
edit2: a bit unstable and I didn’t get it to a launching state myself. From what I read you can get into offline raids, but it won’t work without support from the devs to do online raids. (says so in the discord)

I know they are working on EAC support, and i can also tell you some games with EAC that work on Linux one is seven days to die. So it has EAC and works, but that is the main reason why games don’t work most of the time. So if that is not the case, then i don’t know why.