This installer for Overwatch works flawlessly (so far) on my AMD machine without the graphics card. I just wanted to shout out to whoever did it, you did a wonderful job. Thank you. 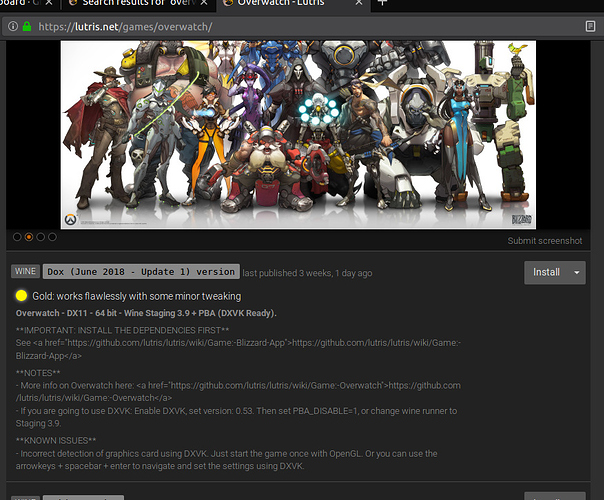 I had an audio issue where if I left a voice channel the client would freeze. That’s no longer happening (same goes for the other install script, too)

The Blizzard app launches fine. Doesn’t look like I’ll get it to work with the GPU until I can upgrade my monitor.

When I check the program files folder, there’s no Battle.Net folder. I believe I’ve encountered this issue before and just had to keep retrying the installation until it worked. I’ve retried it at least 5 or 6 times for the night and no success.

I’ll try troubleshooting this, but any help would be appreciated.

Install dependencies, as stated on https://github.com/lutris/lutris/wiki/Game:-Blizzard-App

Thanks Dox, after I posted I realize that i didn’t read the fine print

Everything is working now

I thought I got everything. I’ll reinstall everything just to be sure.

Got it installed, but I’m still getting this error:

Might this be because I’m connecting my monitor to the graphics card via an adapter?

Installed the proprietary nvidia drivers, and it worked. I was able to play a game just fine. Shader cache may be worse, but that may be because I had my graphics set to medium.