When I use the Silent Hill 2 Director’s Cut Lutris install script, every time the script creates or interacts with the sh2dccd folder, it changes the Owner permissions of that folder to “Access files” only. As a result, the install script fails because it isn’t able to perform the required actions on this folder (i.e. no write access).

TL;DR: The install script is setting owner permissions on a necessary folder to “Access files” only, breaking the install.

Can anyone please help in overcoming this problem?

EDIT: PROGRESS ON SOLVING THIS IS A STANDSTILL. ANY NEW ASSISTANCE ON THIS WOULD BE GREATLY, GREATLY APPRECIATED!

Hi, this is interesting but i believe is the mounted disk permissions:

This file has been truncated. show original

According to that reference merge is basically a copy operation. So you probably need to change the $DISK permissions so that when it is copied the permissions are the correct ones.

Apologies, I am very new to Linux. Are you able to point me in the right direction as to how to change permissions or set additional tasks in the script?

Oh in this case maybe is better that you coppy the contents manually to the sh2dccd folder.
Then we can modify the script to just display a confirmation message.

I will also raise bug report to address the permissions issue.

All this when I get home.

Thank you so much! This is very sincerely and greatly appreciated! I wouldn’t know where to begin to modify the script, so you’re a real lifesaver!

Then you can use the following script:
https://pastebin.ubuntu.com/p/G8KY5yCKHt/

Then during the review of the files needed put the path of the folder here: 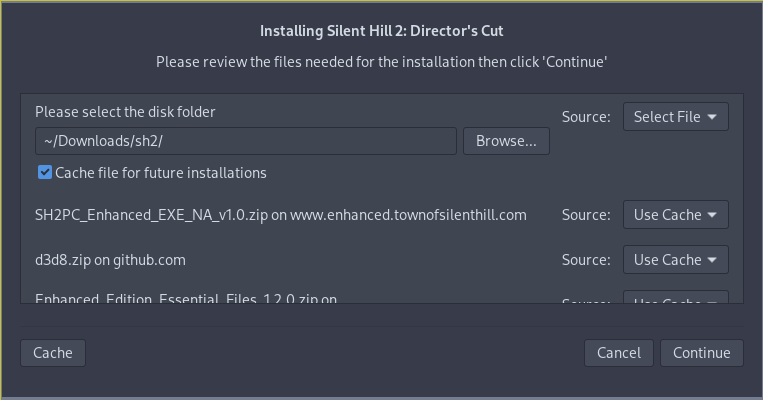 I used for the example the folder:

Then it should continue with the installation as normal.

Thank you so much for doing all that!

Unfortunately, I’m still running into an error message. This time the processes give up during installation and throw up an error code 256.

Good news is that it is a new message. Also did you see the installer pop up or crashed before that?

It should have asked to switch the CD

Yes, I did see the installer pop-up. A dialog box popped-up asking for Disk 1, and I click OK. Then, it prompted me to choose a language. Shortly afterwards it gave me:

Thank you again for your help with this!

Another day another script, I think the issue is that the wine version is too old.
it should work with the old version but surely the newer version is more stable:

Unfortunately, it’s still throwing up an error code 256 in the same place

Do you know if the game is 32 bits?
Maybe that is the reason the other could be that %AppData% is not set in the wine prefix somehow.

Give this one a try, but we are widely deviating from the initial script:

it seems you need to purge your wine:

It crashed before looking for the first CD this time and gave the following error message:

I’m open to purging my wine (assuming it will be reinstalled afterwards) but I’m not sure I see the connection between the Reddit post and my own situation.

What steps do I need to take to purge wine and then successfully reinstall it?

It is this part right here:

Your wineserver binary was not upgraded correctly,

or you have an older one somewhere in your PATH.

Or maybe the wrong wineserver is still running?" "

Specifically the %AppData% stuff, although in your case is not returning anything.
To be honest, I’m pretty out of ideas

To purge wine you need to uninstall it and remove whatever config files you have. You will have to reinstall it though, also you should install the wine-staging version.

I hope someone else can have a look into the installer script v3 and your log and see what really is happening.

Reading that reddit post in more detail, it looks like that user not only purged wine but left it removed, stopped using Lutris entirely and moved onto something called Play on Linux. So, not sure that’s the solution here.

I suspect for some reason, because the CD is not read/write, the copy of the CD contents is also strangely being made not read/write. No idea why it’s happening on my system though.

I don’t have any other problems running stuff on Lutris on my system, so I’m skeptical it’s a problem with my wine and its dependencies.

Thank you again for all of your help with this!

You are right, sorry mate, at least we got it to kinda work but not all the way.