(Note: I am a new user, so am limited in the number of posts and links I can make. I have added “BLANK” into the links to avoid this for now, apologies for the inconvenience)

Originally, I attempted to install MTG Arena via the Lutris application, but when that failed to finish and kept hanging when attempting to connect to the server, I manually installed MTG Arena via the .msi provided in the forums: httpsBLANK://forums.lutris.net/t/mtg-arena-installation-for-october-4th-new-release/6629/36?u=sireofsuns

This seemed to succeed in installing the game, and I have been able to run it without much issue.
However, I have two primary issues with it currently.
First, when alt-tabbing from the application while it is running, I am unable to re-focus the application (unable to give input or receive output from it). This isn’t too bad, but is rather annoying.
The second and more serious issue, is that I am unable to make purchases in the in-client store (there is no out of client store). Specifically, I cannot make any purchase that requires credit card information.
I have included several pastebins with relevant information, as well as a screenshot of the error popup I receive when attempting to make a purchase. 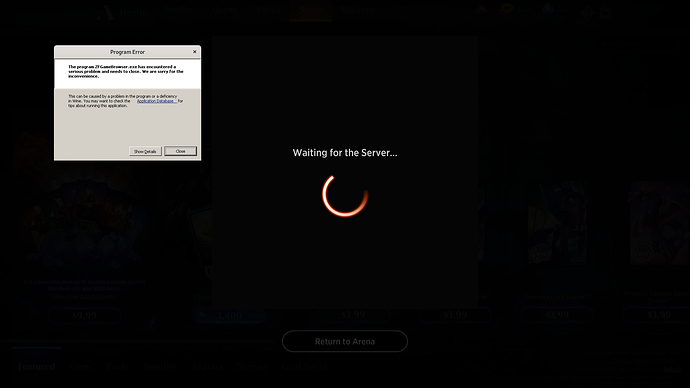