Hello, when I use terminal “lutris --list-steam-games” Lutris recognizes all the games that are installed on steam. But when using gui I am clicking the synchronize button. All of my Steam games show up but lutris does not recognize the installed ones on the gui. Everything looks uninstalled. How can I solve this problem?
Thanks. 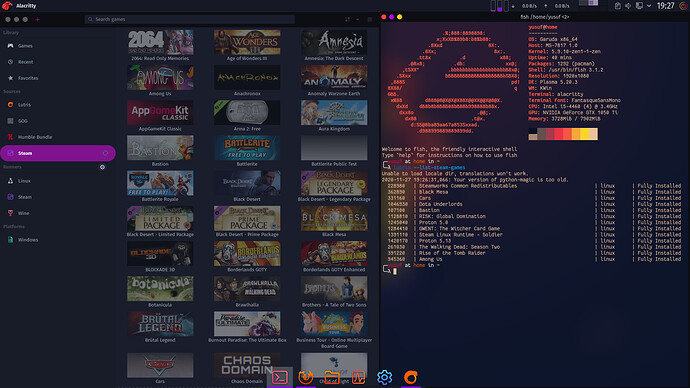 I still have the same problem too since version 0.5.8.

I also seem to have this problem since upgrading to 0.5.8

Edit: It actually looks like my games are showing up under ‘Source Lutris’ and ‘Your Library’ just not under the other sources. Strangely they show up under other sources prior to install, but when installed are missing from other sources.

I’m new to Lutris; same problem here. I notice, when running lutris --debug, the following output on the console when clicking the Install button:

I also see that someone asked this same question on Reddit a few days ago:

EDIT: I see that this bug was already reported 10 days ago, and subsequently fixed:

Steam install fails with "no such column: steamid" on fresh install

Describe the bug Attempting an installation of steam games via the new Steam tab in 0.5.8 results in an sqlite3 error sqlite3.OperationalError:...

Just updated to the new 5.8.1-1 and although the steam sync button under “sources” still didn’t import the installed games, the install button now works! I can now just select install for each game I already have installed and import it that way.