I made a configuration for playing Arma 3 through wine DXVK. This worked until I installed Arma 3 for linux.

This install overwrote my settings for the wine launch of the game leaving me with a useless steam link to linux Arma 3.

Is there any way to prevent this?

Do I perhaps have to use obscure names for my game configurations that won’t be overwritten?

Is there any way to change lutris to manual mode where lutris does not automatically make changes to anything, including adding already installed linux games to the list?

That’s very odd. Wine stuff are confined to their own Wineprefixes and shouldn’t bother “the outside world”.

The only thing that comes to mind is that the default configuration for that game has Desktop Integration. This means that your configuration files are stored in

Instead of the expected

It appears I may have been a bit too vague. I meant the lutris configuration menu for setting up the game. Where you choose the runner, executable, if DXVK should be used etc.

Installing a game on native steam should have zero effect on having a wineSteam game. What I can think of is that you’re trying to use both on Lutris.

In this case, I’ve always seen the “Install (add) another version” option from the drop down menu when you right click a game. As far as I know, unless you have both games under the same “lutris icon”, they should be treated differently.

If the mentioned above doesn’t ring a bell about what happened, I suggest describing how exactly you installed both games in your system. Did you install some of them manually? Did you use lutris scripts for both? Did you install using native steam outside lutris?

Both were manually installed trough steam.

One through the wine steam runner in lutris that was launched when I used a lutris script to install fallout 4 and play it. (Steam stayed open after I closed fallout 4 and there was no available working script for Arma 3 on the lutris website when I looked. I then downloaded it through steam to try getting it to work myself.)

I manually added the Arma 3 lutris “icon”, with the “Manually add a game” option, choosing the wine runner.

The native linux arma was installed through Linux steam outside of lutris after I got arma working with DXVK.

Oddly lutris automatically adds some(not all) of my installed linux steam games to the list even though I have never added these to the list myself. I would guess this is where the arma 3 “Icon” overwrite could have happened.

I can’t find a way to disable the linux runners through the GUI myself to prevent this.

Yeah, that seems what happened.

Since Lutris has a native linux alternative to Arma, it probably overwrote the settings. What bugs me is that you apparently did one, manually, and then also manually added another version. This would mean two separate instances of Arma 3 in two separate game folders. In the winesteam case, a wineprefix.

What bugs me more is that they’re from two different runners as well. Steam and WineSteam.

From what I’m understand, this seems like a valid bug to report. I’m tagging @cxf over here because, from my little understanding, they’re one of this forum’s admins and will be able to correctly evaluate these facts.

If you want to dissociate Lutris from native Steam, you com go into Lutris>Import local games in your local Lutris session and disable Steam from it. You can also go into your Lutris account and de-sync Steam from it, since it doesn’t matter too much, only in a librarian sense.

It appears the setting was off in the program. How odd.

I can’t see steam should be linked to my account either. 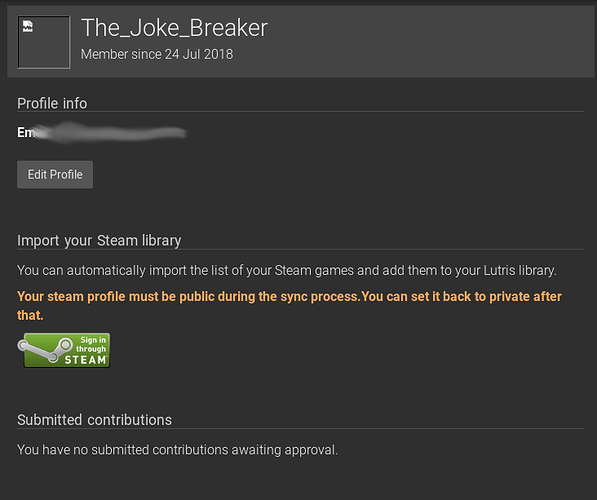 Perhaps the AUR version of lutris is bugged.

EDIT: I am running version 0.4.18-1 according to my package manager.

there seems to be a bug with the game sync in the client, it seems to appear when the same game is installed on both linux and wine.

I created an issue here: https://github.com/lutris/lutris/issues/1001