I have both Firefox and Chrome installed. Installed Lutris but I can’t get the browser to recognize the action to launch Lutris when I click on “Install” on any game’s page at lutris.net

As a workaround, I’m adding the game to my library, syncing and then installing from the program. Is there any bit of sourcery I need to add to either Firefox or Chrome in order to open lutris’ links?

The browser integration should work. Maybe it’s a problem with the lutris package on your distro? Or running a desktop that isn’t Gnome based?

This file https://github.com/lutris/lutris/blob/master/share/glib-2.0/schemas/apps.lutris.gschema.xml should take care of Lutris links, if properly installed it should work just fine.

I am using LXDE, and I have the same problem.

Also:
the link: https://github.com/lutris/lutris/blob/master/share/glib-2.0/schemas/apps.lutris.gschema.xml is broken.

Can any one help?

Hi there! I am using manjaro xfce and have the exact same problem. The link is also broken and I cant seem to find a solution! Please help! Thanks!

Is this a regression? Did it used to work?

It is the first time I am installing lutris and it is not working. There’s more when I open the actual lutris app I dont see any of my runners. Here’s a picture:

I click on manage runners and installed a few but I dont even see the firefox and linux runner. in the view tab I have enabled the side panel. Pls help I rly want to start using lutris! Thanks!

EDIT: All of the above I had tested on my laptop which runs manjaro as I have said already. Yesterday I installed Manjaro on some spare space on my HDD on my desktopPC. The isuue is exactly the same so I am wondering maybe lutris is fine and I need to make certain configurations to browser/manjaro/lutris itself to be able to use it?? Idk but I would rly much appreciate any help because league of legends is the only thing that keeps me from deleting my windows partition. Thanks!

I am also getting this issues.

If you are using firefox, I found a way to fix the issue. I think it’s more firefox’s fault than Lutris’

wiildrick is correct for firefox
in chromium, installing xdg-open resolves the issue for me

I need to go into firefox debug mode (without addons) to get things to work - it seems that lutris doesn’t play nice with uBlock origin/uMatrix or the other way round. Does anybody know what to whitelist?

thanks , it works for me

Had that issue with Firefox on Solus. Thanks for the workaround!

When I click the link where I should choose which application to use, my application list is empty. 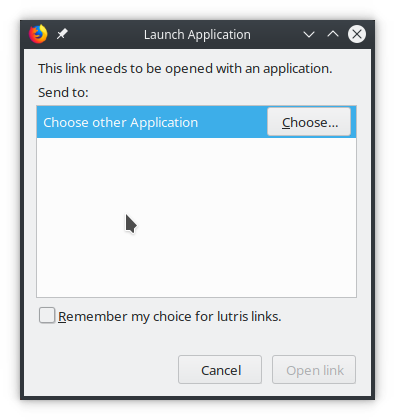 Is there a way to populate this list, or should I point it to a specific file?

I had to run:
sudo update-desktop-database

Or maybe it was without sudo. There is a thread here that might have other solutions: https://github.com/lutris/lutris/issues/608

The last comment on that thread had the answer I needed, here it is:

After selecting /usr/bin/xdg-open, and setting to remember for Lutris links, it works as expected.