I wanted to finally get rid of win10 and therefore have its last right to exist, WoWs

The game starts, works so far and runs very smoothly.

I still have a very strange bug: I can not move the mouse freely.

I am always trapped in a corridor.

For example: Sometimes you can only see over the bow to starboard halfway and thus only align the guns there, then it’s another area and then later another narrow area is blocked.
Totally strange.

The view behaves like a restricted Torpebo-shooting range that you can not leave … so it is not really playable.

Does anyone have an idea how to fix that?

This is a fairly common Wine problem in my experience… Mouse doesn’t properly get captured by the game and behaves like in the desktop (limiting the area you can move it to a fixed rectangle). IIRC, it usually starts working after you enable autocapture in winecfg (and if it doesn’t then alt-tabbing several times might fix it) 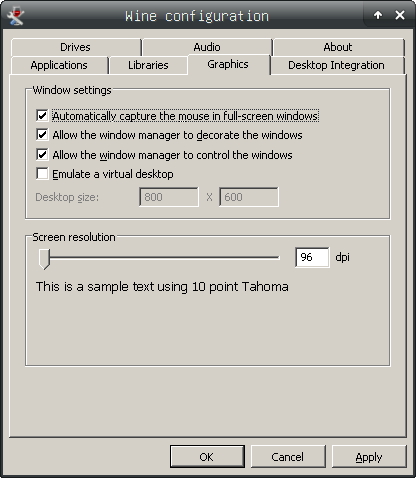 Hey,
thank you for your answer.
Indeed the box is unchecked.
I did not “dare” to change the wine settings since it’s sad that Lutris brings in the perfect settings for each game by itself.

In the meantime it seems that the error is gone by changing the wine version .
For whatever reason it was set to tkg-osu-4.0, after changing it to 4.6 , the error was gone.

Unfortunately, there’s no such thing as ‘perfect’ in the world.
In Lutris, people make install scripts that seem to produce working results, and they’re accepted as long as they seem to work for others as well. Still, some problems are caused by differences in hardware and/or environment, and thus aren’t easily discovered. So there’s no reason to abstain from touching settings if they can fix a problem you’ve encountered (at the very least when the change is reversible… but even if it isn’t, nothing is stopping you from removing a botched install and make a clean one again).