PD: After having made this guide, I am limited in putting multimedia elements at the time of publishing it. I am sorry.
Hopefully I would be allowed to put the remaining 9 captures

I leave this post to help other users since I am a newbie in Arch-based distribution and it took me my time to get everything ready. And I would like other users not to despair since being a beginner and entering Linux coming from Windows is quite a challenge.

I installed the game by snap, but I was surprised that it had 60 or 80 FPS, when in Windows it was more. I assumed that this is because it was using the integrated graphics of the CPU itself (Intel graphics). The game was going well, but because of the snap you can’t change values ​​in the launcher, and even lost FPS in teamfight and that is annoying, because you don’t play fluid.
Look for information for a few weeks until everything works correctly, the only thing I see is that I have considerable drops in FPS, but not at all annoying, the games can be played perfectly.

I was modifying values ​​until I managed to make it work as if it were in Windows, I will leave some screenshots for people to see and leave it to point the configuration.

And that if, you have to install the respective drivers of your graph and dependencies, both Vulkan and Wine, but in Wine Lutris is in charge, so 10 out of 10.
Vulkan support

He also left you the DXVK installation guide, which is important because it is Vulkan-based translation for Direct3D 9/10/11, I run Linux-based 3D applications using wine.
DXVK

You have to use the wine version, which at least works well for me with lutris-lol-5.5-2-x86_64. In case you go wrong there is a version of wine for LoL, called winelol, which works well in low-requirement teams, winelol is thinking so that LoL is played well.

I only had to change certain values ​​to the launcher and everything was done. As we already know the effects and certain things sometimes get bugged, but it is not annoying at all. All this in the game client.

Now I leave you screenshots of Lutris preferences> System options 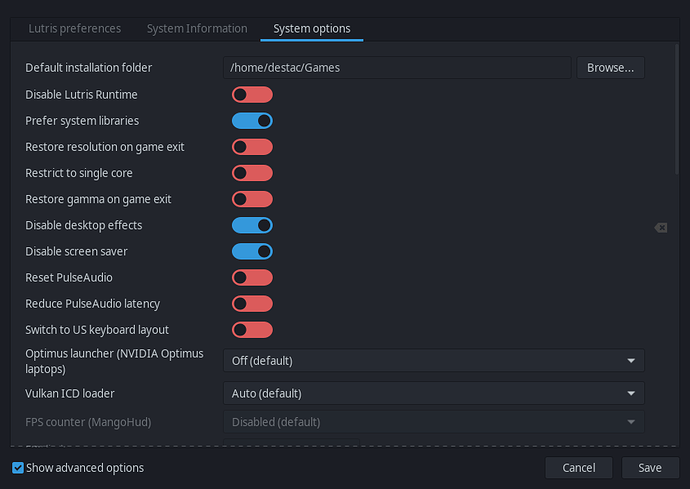 Now the configuration when launching LoL, just modify values ​​in Runner options and 1 or 2 things in System options.

I know that I have not given instructions on the installation of the DXVK dependencies, since you have all this in github well explained and how to install it. In this case, DXVK already had it ready without doing anything, surprisingly.

I hope I don’t forget anything and this helps beginner people. I hope that people who enter Linux stay, it seems to me a fantastic world that can teach you a lot, where everything explains how to do it and why. And where people create, share and compile their code to help others.
Not like other companies.

All the best for this community.