Is there a way to test a new runner?

The 7 Days to Die Linux version runs like absolute garbage (unplayable). While they may fixed the issue in the future, the steam proton version runs significantly better/with fewer issues. I’d like to attempt to create a runner for Lutris for submission to install the Windows version instead and use DXVK. How do I go about doing this?

Last time I checked, the policy was “do not.” (More specifically, if a native version is available, Wine install scripts were not allowed.) But that was awhile ago, and the guidelines are nowhere to be found. So, no idea if the current stance is still the same.

As for creating an install script (which is what I believe you’re referring to here), you can do it from the game page in Lutris DB: 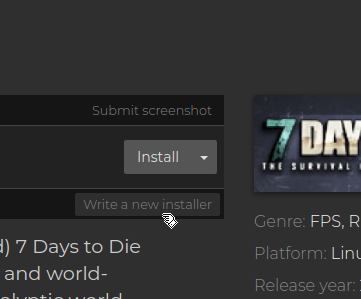 This link will open a new installer page. On the right side, there’ll be extensive docs on the scripting. I advise to find a game with already existing installer of similar type (using the same runner or whatnot) for sake of reference (or possibly to use as a template).

When the script is complete (or at least appears to be), click “save draft”. You’ll be redirected back to the game page; after clicking a button to reveal installer drafts (it will appear next to “Write a new installer”), you’ll be able to open it for edit again:

At this point, under the edit a new button will appear. It’ll allow you to run the installer draft the same way as clicking “install” does; you’ll also be able to make new changes to the script if they’re needed and save them, which allows to add installer tasks or fix mistakes. Take note, that “try the installer” button runs the latest saved version, and not the current script (so you need to save before testing the changes).