Hi!
Sorry for my english.
For example: GOG version of S.T.A.L.K.E.R. Shadow of Chernobyl has different installers for different languages, but Lutris script downloads only english version of installer.
Is there’s any way to make the script, so user can choose which version of installer to download.
I know I can use “input_menu” to create a menu with laguages to choose, but I don’t know how to use/is it possibe to use selected language to download specific installer.

This installer already gives you the option for choosing the gog setup exe, by using this: 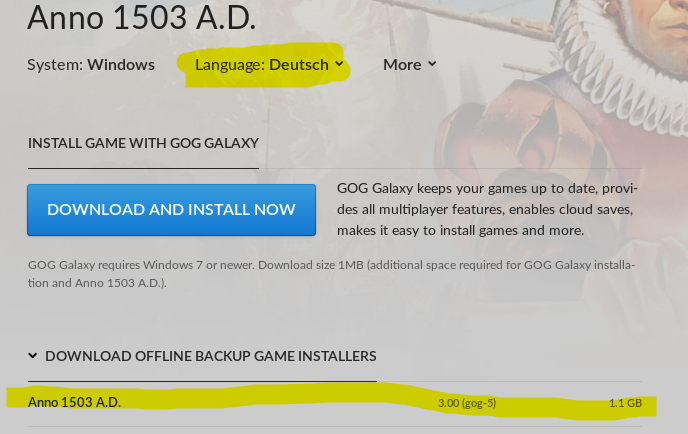 In this case i selected German (Deutsch) as language.

Thanks for reply.
The problem is, that installer doesn’t give me any option to choose installer.
From the script I can only select wersion of game to install (wine CD, wine GOG, Wine steam) and when I select wine GOG, I can only select destination folder. After this script start to download english installer.
Do i miss something? any dependecies? something in Lutris configuration?
I’m using Mint with Lutris installed from repo and I imported my GOG library into Lutris.

Hmmm, that doesn’t sound right to me. I only have one game on gog right now to test with which is Anno 1503. There the installer has the same lines in the install script to choose the installer executable. When I install the game and select wine gog the first dialogue is the installation directory an the next dialogue asks me to select the installer executbale. Then i chose the .exe downloaded from gog in the right language. Maybe it has something to do with it, that you imported your gog games to lutris and lutris then automatically downloads the english version for you?

I had the same issue and found a fix:

If connected, disconnect. Then launch installer and when the gog login modal appears, just close it. Right afterwards there will be a dialog asking for the downloaded file(s).

If not written anyelsewhere, and for GOG games only (for now) we can see here that it is force to “english”, until something better come along…

Will take a look into it next if something is doable.
GH Issue has been made here (not by me)