How to manage WINE game locations?

How would I go about telling winesteam where to actually install the games? I don’t want them in /home, because there’s not nearly enough space available.

Or would it be better to already put the prefix where the games should go? How would I move it there so Lutris will still be aware of it?

You can move the Steam folder outside of the winesteam prefix then specify a custom location in lutris. 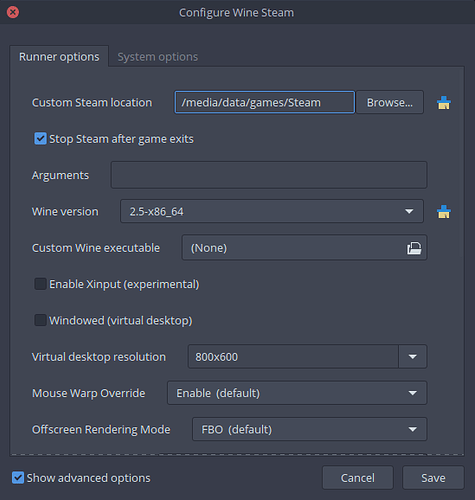 Hmm, wouldn’t that break the WINE version handling? I was thinking along the lines of mounting the new game folder as a new drive inside that WINE config.

The default WINE installation has this nice GUI where you can configure the drives you’ll have access to from inside WINE. How would I do that for the WINE installations that Lutris creates?

My Steam for Windows folder is 10 years old, it has been on 3 different computers, seen many different distros and crossed the Atlantic ocean, it will work with any Wine version you trow at it

I was thinking along the lines of mounting the new game folder as a new drive inside that WINE config.

You can do that but handling it from Wine would be fragile and prone to breakage.
Instead you could do what I do for Steam for Linux and mount the Steam folder with the bind option:

I’m not really concerned with Steam itself. I’m using the one installed in my system’s ~/.wine folder just fine.

I was talking about where WineSteam is supposed to install the games. I’d like to leverage Lutris’ ability to handle the different WINE version installations, so moving the prefixes elsewhere would cause unnecessary work.

That’s why I’ve chosen to configure a new drive letter in winecfg of the prefix that Lutris installs and then configure that inside WineSteam as the default library folder. I’m still wondering though, if it’s a better idea to symlink/bind the default library folder on “C:” to where I want the games to be installed. That way I could leave all the Steam configuration at defaults without it even noticing, right?

Sorry, if I’m annoying. This is all somewhat new to me.

I found that just setting a specific folder for a new steam library in winesteam is a much simpler solution to choose where everything goes.