How to import wine steam games?

I dont know how how to import wine steam games to my library.Pls help me.This new version of Lutris makes me mad.

Kinda the same as its always been, just buttons have moved around a bit.

Are you transferring from another PC or have you upgraded/reinstalled?
Are games already installed? Have you got them all in the same WINE prefix, or seperate WINE prefixes?

Whether you just install the WINE Steam runner and use it as a prefix with everything in it, or download any WINE Steam installer, and just copy what it does for your other games - take your pick.
You can always get your app IDs from https://store.steampowered.com by searching for your game.

Before, I was able to install the game and add it to my own library, but now it’s not possible because I have to go to wine steam and run games right away.

In 5.8, after I linked my Steam account in Sources on the left, the games I had previously installed via Lutris that used WINE Steam runners, all showed up as installed - but only those.

All the WINE Steam installs are missing from “My Library” in the new Lutris tabs, but I use Favourites as my go-to screen anyway.

Stuff I run from the Linux client doesn’t show - hard to do game and prefix management I guess.

Only customisation on WINE Steam runner is that I do have the default install path configured to a volume under /games/wineSteam/ rather than the default /home//.local

I mean this option: 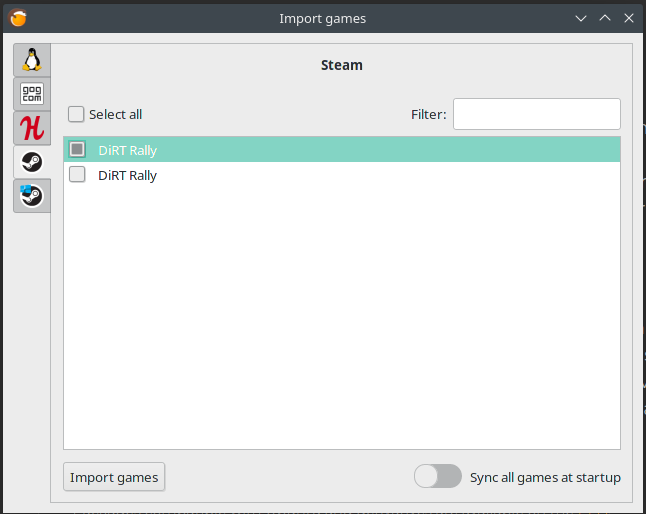 Until this option is unavaialbe i will still on previosly version

Yeah, where in the world has this menu gone? Lutris was way better before that update.

I can’t import my Steam games that I’ve already installed. This sucks. I want to use Lutris as my universal launcher.

Any news on this?

@legluondunet Is there a chance to get the import menu back in the next update?

I understand the import option was removed because they don’t want Lutris connected to other services (Steam, Origin, GOG, etc), but what about things like flatpaks and snaps? Those aren’t necessarily connected to a service and it was incredibly simple to add these via the “import” option. I hope the team takes this into account for the next updates and brings the import option back.

Why don’t they want Lutris connected to other services?