How to add a game with a SIMPLE EXECUTABLE that otherwise runs by clicking it in the folder? (Linux native game)

I downloaded a game (Lockdown Protocol by FRACTiLE Games) and after extracting the tar.bz2 there is a simple clickable executable and the game runs.

Except not on Lutris. Lutris offers “install” and clicking that button just brings a blink and nothing happens. Why can’t the executable be just addable to Lutris for running? Why the “install” offer? What possibly could there be to install anyway?

The file has NO extension (such as .sh) it is just a file called “lockdownprotocol” with a gear icon.

Thanks for any clarification. I think this should be much simpler

I guess you are trying to use an installer instead of creating a custom launcher.
I believe what you need is the custom launcher so press the “+” in the top left and then select “Manually add game” then point to the game executable.

No! Absolutely not trying to use an installer.

Like i stated, the game launches and runs just clicking that EXECUTABLE (it is not an installer) in the file manager.

When i indeed click that “+” button and search for THAT SAME FILE (executable, not an installer) in Lutris, then Lutris just offers “install” and won’t launch the game. Actually (again, like i said) nothing happens when i even click that “install” button (which shouldn’t even be there as offered as the game runs thorugh that one single file “lockdownprotocol” (it’s without an extension, as i yet again also said).

Even if i “wanted to install” this game, it couldn’t be done: the game “just is” in the extracted folder and that executable is clicked to run the game.

Sorry, I probably was not clear and ther might be some confusion. I’m currently not at my computer so I can’t take a screenshot but if I remember correctly you have to select the last option after pressing “+”. There you should be able to select the executable and you should not see any button that says install. I will screenshot the process later.

He’s right. You have to click the + icon in lutris and create your own “launcher” when creating it, lutris asks what type it is, wine, linux and something else i cant remember. You will obviously select linux as the game is linux native. Then just browse to the executable and add it. I would make a video for you but im also not at my pc.

So now with more screenshots, after clicking the “+” you should see this screen: 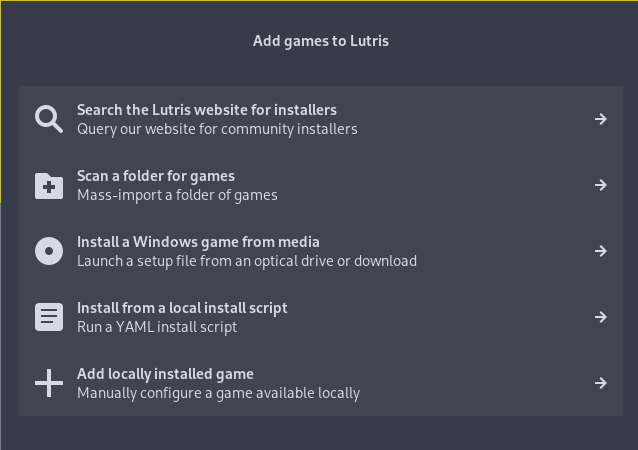 Here select the last one “Add locally installed game”
Then a new window will open here you need to fill the information manually, name of the game and so on but also select the runner “Linux (Runs native games)” as shown:

Then go to “Game options” and point the launcher to the executable file that you usually use as shown here:

The screenshot looks weird because I had a message pop up but I think it is clear.

Let us know if this works.

Yes this way it worked! I think this should be much simpler though. I’m a seasoned Linux user and did not figure it out initially. Maybe everything should be on that same bar on the left of Lutris with sub-menus or something.