How can I choose what programs see as their "C:" drive?

Hi guys, I’m a long-term Linux user for work but I’m just now switching to it as a home desktop OS for gaming.

I have a new Ubuntu 20.04 install with Lutris. I have several hard drives on this computer, but I can’t seem to control to which one Lutris installs games.

I’ve tried a couple of games, and whenever I install to “C:\Game_Name”, it seems to install onto my root partition, instead of the drive I want it on. I’ve sent the mount point of the drive in Lutris’ “Default installation folder”, but I can see the space ticking down on / while it’s installing.

How do I control where Lutris puts files that installers are referring to as “C:”?

Are you talking about Windows games (there’s no such thing as a C: drive in Linux)? Those run via Wine, and the fake Windows environment files are stored in a folder called wineprefix (~/.wine/ in case of default/global Wine install); usually, most drive letters are assigned manually to arbitrary folders, but Z: drive is assigned to / (as backup path resolver), and C: is set to drive_c/ subfolder of the wineprefix. And in case of games installed by Lutris, the installation path you confirm on the first screen of game installation process (defaulting to {default_install_location}/{game_id}) is the location of the wineprefix of your game. So, change (or mount/bind/symlink) that default install location to where you want it to be.

Yeah, I’m installing Windows games in Lutris, and the installers give me a Windows-style install path.

Thanks for your tips, I’ve found what I needed now. In ~/.wine, I have a “drive_c” directory. I’ll move that to the drive where I want it, and symlink it.

In ~/.wine, I have a “drive_c” directory. I’ll move that to the drive where I want it, and symlink it.

…Did I mention that by default Lutris creates wineprefixes for games in the default install location? 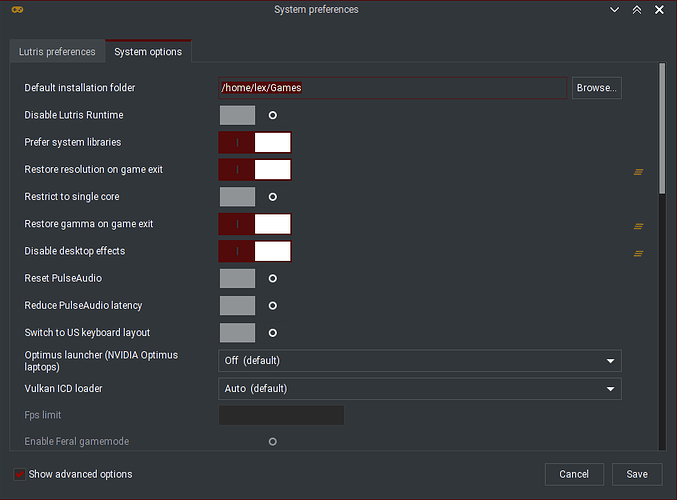