Hades page on the website has an Incorrect link to IGDB

Current link
Correct link
Because of this, the launcher loads the wrong coverart for the game. 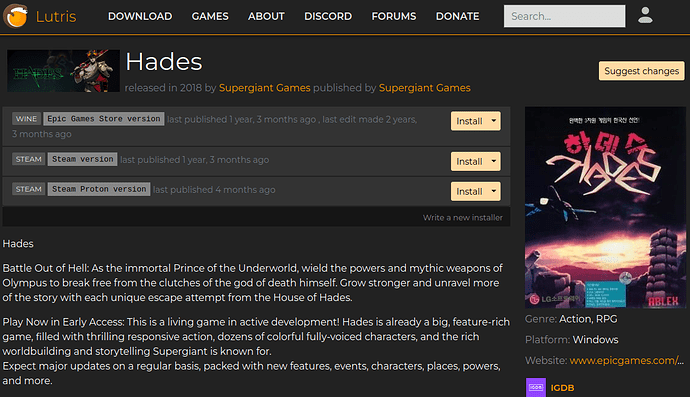 Unfortunately, it seems the submission process is broken. Once you upload a new image, the image seems to just replace the image at https://lutris.net/games/banner/None.jpg

If you pay attention and visit that link every few days, it seems whenever someone submits a new image, that None.jpg image gets replaced over and over.

Also, and maybe I’m wrong about this, but it seems admins are ignoring those change requests.
I have change requests that I made months ago, with corrections and new images, but they haven’t been attended. It could be that they lack the manpower to attend all the requests, or that the system is broken and they are unable to attend them even if they want to.

But this is for a banner, and I’m talking about the coverart, which is downloaded automatically (i suppose) from IGDB website. In this case from wrong IGDB page. Banner is correct, but not coverart.

Yes, there is no way to directly edit which IGDB entry it should use.

You see, I did something like what you are trying to do for both of “The Room” games.

There is this one: The Room Tribute - Lutris which is a fan game of The Room movie. But then there is this another one: The Room - Lutris which has nothing to do with movie or the fan game, it just happens to be also called “the room”, but it is using the cover art from the movie fan game. And its not only the cover art, but its also using the wrong description. I guess the website is automatically pulling it.

So what I did was to use the “suggest changes”, edited the description, and on the “reason” part, I explained that it was using the incorrect IGDB entry.

But it hasn’t been fixed, and I did that change suggestion on January 23.