First, I installed the game on a Manjaro Linux and it runs okay (not that smooth as I heard that it would be, probably because of the few libs that are missing and throwing errors), but that’s okay, with the time and the debug prints I’ll fix them.

What I want to know is: the download speed is incredibly slow for everyone or is it just for me?

I’m downloading things with 100 KB/s, when usually on the Warframe launcher, using Windows, I could reach 10 MB/s.
Of course, there’s a lot of other things that would cause this situation (like network congestion) but I want to know if it’s a script error and there’s something that could be done to fix this, or if it’s a Warframe’s server problem and there’s nothing to be done. I didn’t find any updated news in this forum bout this problem, I don’t even know if that are ways to run the graphic launcher, instead of the script on the terminal (but I think that nothing would be different tho)

I’m a newbie on the Linux World, so if u need some debug print, just tell me, because I don’t know what can be helpful right now.

That happens sometimes with Warframe. Its likely not on your end. Usually only happens when the servers are serving too many downloads during updates but I’ve had it happen other times.

Try just letting it go and see if it picks up

It’s been 2 hours and the estimated time is 23h+. I’ll let it downloading, but this doesn’t seem right.

If you are using the official launcher, disable Massive Download, as it can lead to corrupted downloads, and enable Aggresive Download to have more than one connection at the same time, this way the download will be faster.

I don’t even know how to use the official launcher, everytime that I try to run it nothing happens. In order to open the game I just click on the shortcut from the Lutris interface and this script starts to run. 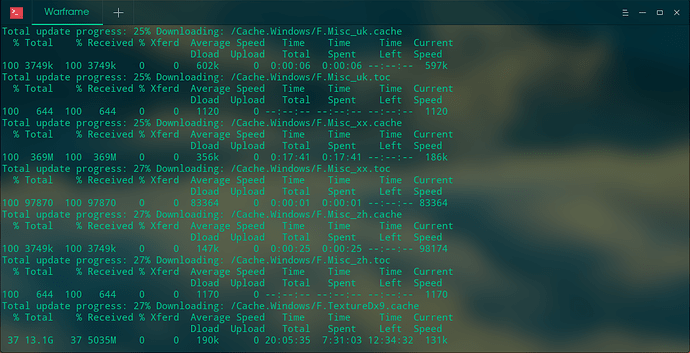 I left it downloading all night long but still very slow, with no signs of speed oscillation.