Creating a new shortcut from the same runner

Okay, I installed a GOG game (Grim Dawn). There is a 3rd party mod tool (GrimInternals) that I would be like to be able to launch as well from time-to-time for testing purposes (it launches Grim Dawn with it’s various modifications enacted). This tool gets installed in Grim Dawns default installation directory.

Over on the Proton Github for the game I found a way to be able to create a script to make it launchable thru my Steam version of the game. 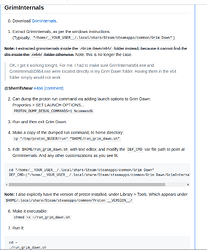 Is there anyway at all I can replicate this for my GOG version of the game thru Lutris? I feel that there must be a way. I know I can go into the options for the runner and change the .exe it points at but that’s not what I’m going for. I’d rather have a separate file I can launch it from.

In theory, you just need to run it within the same wineprefix by the same Wine binary. If you write a script file for that, it’ll look something like this:

Then, if you want to make a .desktop file for that, just set the script as the executable (speaking of which – it should be marked in filesystem as executable to run; via terminal it’s done with chmod +x path-to-file).

Pretty sure I added everything correctly…

but I get this…

Am I missing something? If I point my runner at the GrimInternals64.exe instead of the Grim Dawn.exe it accesses it just fine and then goes on to launch the game with no issue. Everything is where it needs to be.

You can try adding cd "path-to-folder" before the Wine call (and passing only filename to Wine), so that the workdir is the game folder.

Bingo… that did the trick right there. Appreciate the help alot. I’ve always found Wine kinda intimidating to wrangle with and have only just begun getting serious about trying to get my head around it.