Battle.net logs in but is not connected

That being said, I installed lutris, installed the BattleNet launcher after making sure I had all the prerequistes (wine dependencies, vulkan drivers, ext4 drive system and not NTFS, etc.), the launcher does open, it does recognise my account, I can install the games and I can launch them, but the launcher cannot log me in (see screenshot below), and the game I want to play (diablo 2 resurrected) forces me to be conected if I want to play.
I’ve read on other threads that I should directly use the game’s installation script provided by Lutris, and not the BattleNet launcher, two issues with this, the first and most important, the game came out less than a week ago (I’m writing this on 28th september 2021) and there doesn’t seem to be any installation script for it, the game appears on the Lutris app if I search for “diablo” under the Sources > Lutris tab, but doesn’t let me install it, and if I search for “diablo” on the lutris web site, the game doesn’t appear as supported. Second issue, even if it was supported and I could install the game through game pecific installation script, would that let me play with the characters I have in my BattleNet account and let me play online?
Anyways, the problem does not come from the game itself, it’s the launcher that doesn’t connect to my account. 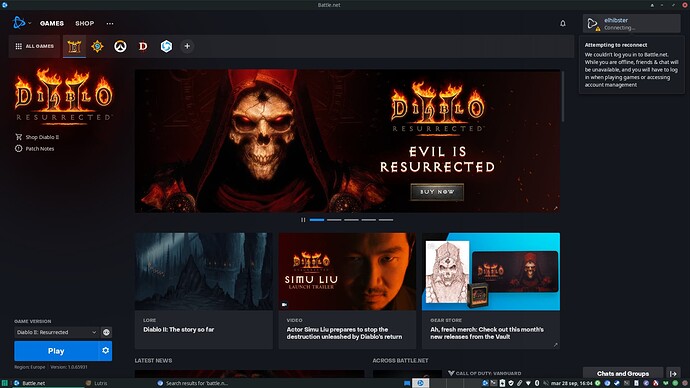 For more info, ask me and if it’s not really evident, plz tell me how to get said info, chances are I have no clue T^T.

Try using the most recent World of Warcraft script to install Battle.Net. After all the battle.net updates are applied etc, launch the new battle.net to see if you can log in. Also check what runner your are using - make sure it is the latest one available. If you can log-in, use the locate game button in battle.net to point to your existing Diablo install folder in its prefix folders.

Hi, sorry it took me a while to get back to you, I tried using the WoW script from the site, at some point there’s some sort of a terminal showing the installation logs and above it there’s a message that says “Do not try to log into Battle.net, just close the Battle.Net login window when appearing. After Lutris installer is finished, you can start Blizzard App with “Launch the game”, and install / locate your Blizzard game.”, as soon as the BattleNet window pops up I click the x button to close it and it says “Cleaning up” but it doesn’t close, and after a while the terminal gets stuck in a loop and only sends this message every two or three minutes:

So lets be clear on the process you followed:

Is this what you were able to see?